Most of us take “sustainability” to be a pretty compelling and important objective, and this is an often requested feature in building design, but beyond all the marketing hype and virtue signaling, what does this term really mean?, and what exactly is required to achieve it? 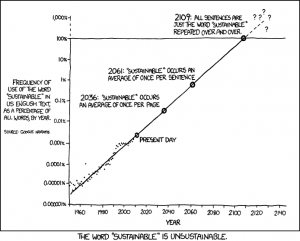 Sadly, “sustainability” is rather an abused and emotionally loaded concept – with many different people using it to serve different and often quite contradictory agendas, and as a result, there are many definitions for the word.

This Wikipedia article gives an overview of the problem.  To most of us though, at first take, any intuitive plain English definition would probably describe the capacity of our environment to be maintained or to remain unchanged indefinitely under the effects of some human activity.

“Sustainability”=environment will remain unchanged if an activity occurs?

Desertification is one process where there is good evidence that human activity is altering environments  – deserts are expanding in many parts of the world through agricultural practices that increase wind-blown soil erosion and reduce rainfall. 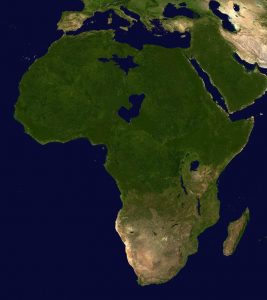 The Sahara desert was long thought to be one such example, but there is evidence now that the Sahara may be slowly shrinking and becoming wetter & greener as the warming earth alters rainfall patterns & provides an increasingly fertile atmosphere (C02 is plant food).  If human activity is causing the warming as is widely suspected, ceasing the activity might halt or slow this greening process.

Whether it is shrinking or growing under the effects of human activity though, fossil evidence shows that the “eternal sands” of the Sahara, even before humans came on the scene, were anything but enduring.

We now know the Sahara was not even a desert at all a mere 10,000 years ago but had also previously been far larger than it is now.  In fact, this environment appears to be alternating naturally between wet & dry to follow Earth’s ever-changing climate.

The underlying point here is that though we do clearly have an impact, with or without human input, in nature nothing remains the same indefinitely – there is no natural environment that will be preserved forever simply because humans restrain their behaviour.

Assuming the Sahara really is shrinking due to anthropogenic global warming, this case also illustrates that not all change caused by humans is necessarily even bad.

Perhaps then this “unchanging” benchmark is not quite right for describing sustainability?

Perhaps, if we soften our definition considerably to describe only those things we do that do not degrade environments to the point where our foreseeable descendants will be negatively impacted, perhaps we may be getting closer to something we can use.

“Sustainability”=environment will support human life indefinitely if an activity occurs?

This approach implies acceptance of natural variability and of human modification to ecosystems but managed in a way such that the rate of resource extraction is balanced by the rate of recovery of the environment to achieve long-term stability.

But we are still not all the way there!

Incontestably nearly all of the quality of life improvements each successive generation has achieved and enjoyed so far (medical, educational, cultural) were made possible through economic growth and increased rather than stable rates of resource extraction – very many of which resources are not renewable … and the result has clearly been environmental degradation in many cases.

So far, rather than negatively affecting their descendants, use of non-renewable resources and environmental degradation by our ancestors has accompanied longer, healthier, less arduous and more stimulating lives.  This holds true for more people today than ever before – even in developing countries! And there is every reason to assume that such advances will continue and become more widespread –  as long as there are unused resources available to fuel their development.

Or put another way, at least as things stand, reducing human resource use will entail shorter, less healthy, more arduous and less stimulating lives for our descendants.  If we do take the well-being of our descendants into account,  we may find that nothing is made truly “sustainable” in the long term simply by minimizing our environmental impact in the short term.  After all, people who’s aspirations are curtailed have a fairly consistent history of not sustaining the political and social systems that thwart them.

“Sustainability”=environment will support human life AND human aspirations indefinitely if an activity occurs?

However, even a  definition along these lines may not suffice. because even if our descendants did settle for something like the restricted “simple” lives our ancestors once lived, as a model for sustainability, we still hit a rather large snag  –  population growth.

Imagine all 7 billion of our current global population, let alone a projected 14 billion all simultaneously attempting to forgo industry & infrastructure and live off the land … this is clearly just not workable for very long, and the environmental impact of trying would likely be far more devastating than anything we do now!  There are already far too many of us to feed  & find cooking and heating fuel for, and far too little useful land and forest to obtain these things from in a renewable way as it is – we depend too heavily on the efficiencies of our high-tech infrastructure and intensive fossil fuel burning farming & production  methods and transportation networks  just to sustain our current population, and we will need to use more resources, not less, as the population grows.

We also know on the other hand that production and consumption (by definition), is what drives strong economies, and strong economies provide the economic surpluses that fund widespread educational & cultural opportunities,  social welfare and old aged care, as well as driving technological innovation.    We also have good evidence that families in economies that deliver these things become smaller, in part because parents (and in particular women) have more economic options – and couples no longer need to rely on having many children to support them in old age.

Conversely, it seems pretty clear that population pressure (as well as all the awful social fallout we know accompanies high population levels with low levels of economic development) would be made far worse by any attempt to seriously reduce consumption levels.

In other words, we have to somehow reconcile three seemingly contradictory imperatives: any useful definition for “sustainability” invokes not only the need to protect and manage the natural environments that support us but also the need to maintain high levels of economic activity, because this, in turn, is required to support the third agenda of meeting long-term human needs and aspirations as well 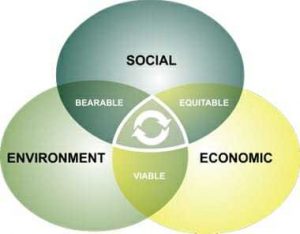 Is there really a sustainable “sweet spot” in the middle?  Well, it depends …

Technology is often put forward as the magic bullet that could eventually solve our environmental dilemmas, allowing us to achieve more with less environmental degradation – and with the benefit of strong economies, our levels of innovation and capability do tend to improve constantly (even if these advances are not always directed at environmental protection).

However, no matter how good we get or how focused we get on environmental issues  there will always be upper limits on what we can do at any given time – some pretty startling breakthroughs in efficiency, energy generation and resource extraction technology will be required to substantially alter the underlying trajectories of socially sustainable consumption vs environmentally sustainable supply of resources for our ever growing population.

Which all goes to suggest that in tandem with technology, the key to unlocking the tension between preventing environmental degradation for our descendants and facilitating their human aspirations, is to for us to seriously address our population size.

So, perhaps with all this in mind we can now set a more meaningful benchmark for  sustainability:

“Sustainability”=the environment will support human life AND human aspirations indefinitely if an activity occurs, for a given population size

Fewer people simply make less impact, whatever their level of consumption – what might not be “sustainable” for  20 billion, might well be perfectly sustainable for 2 billion.

In architectural terms, while we can make a difference through incorporating more insulation, solar hot water systems, thermal storage, PV and wind power generation, optimizing window orientation, building forms etc, and while these good things are also getting better as technology and understanding improves, simply having one less child is probably at least as effective and environmentally responsible, and dare I say it; sustainable – as any other choice you as a citizen of the world could make.

… and if the money you save by having fewer kid leaves you enough for that Architect designed eco-home, everybody wins!

About the Paul King

Paul is a Christchurch based architect, BIM modeller, blogger and general purpose geek, who is unfathomably excited about the interface between architecture and technology, and writing small autobiographical summaries.